CureLab Oncology Granted US Patent for Therapeutic Use of its Lead Product in ALS, Alzheimer’s, Huntington’s, and Parkinson’s Diseases 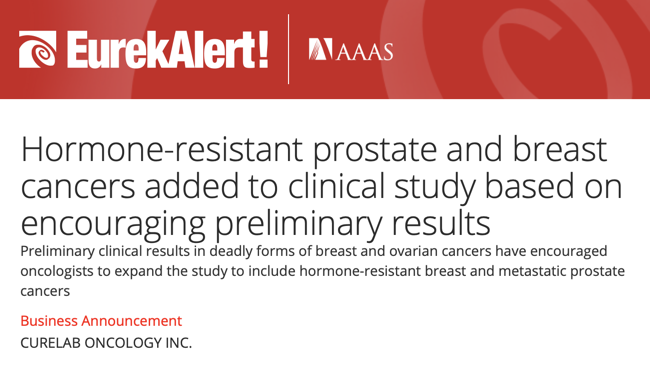 Preliminary clinical results in deadly forms of breast and ovarian cancers have encouraged oncologists to expand the study to include hormone-resistant breast and metastatic prostate cancers; at the center of the study is CureLab Oncology’s Elenagen, an experimental DNA therapy 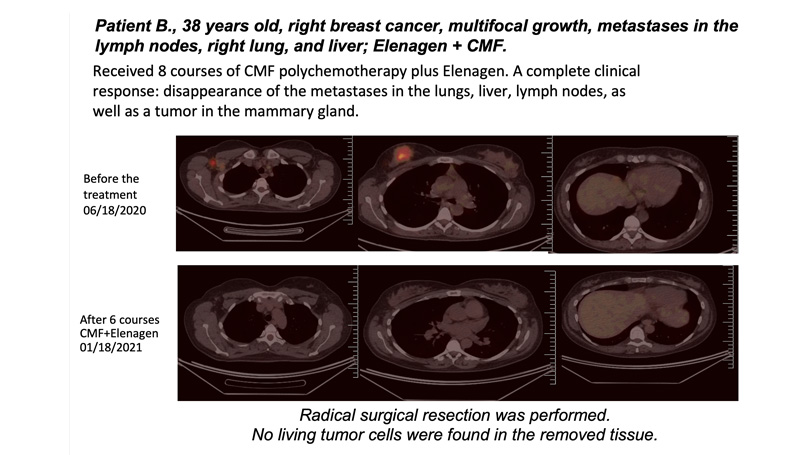 IMAGES SHOW A COMPLETE CLINICAL RESPONSE: DISAPPEARANCE OF METASTASES IN THE LUNGS, LIVER, LYMPH NODES, AS WELL AS A TUMOR IN THE MAMMARY GLAND 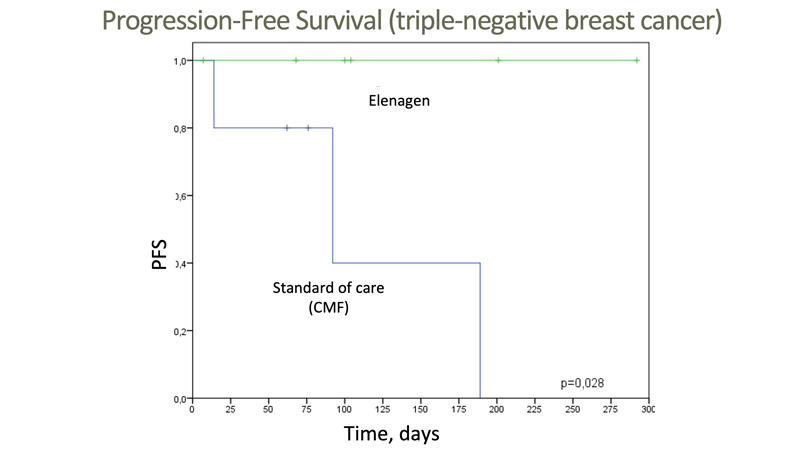 
MINSK, BELARUS—August 3, 2021: The Republic of Belarus Ministry of Health has approved expanding the ongoing clinical trial of CureLab Oncology’s Elenagen™, an experimental DNA therapy, to include two new arms: 1) hormone-resistant breast cancer; and 2) hormone-resistant metastatic prostate cancer. The decision to add two more deadly diseases to the ongoing study was based on encouraging preliminary results observed in triple-negative breast cancer and platinum-resistant ovarian cancer patients who received Elenagen in combination with standard chemotherapy.

“We conducted a worldwide search for the most promising immuno-oncology therapy that could be tested in combination with standard chemotherapy, and selected Elenagen, a DNA product developed by a Boston-based biotech company, CureLab Oncology,” said Professor Sergei Krasny, MD, DSc, deputy director of the N.N. Alexandrov National Cancer Centre of Belarus. “It’s too early to conclude anything, and COVID has somewhat slowed down our clinical trial, but the clinical responses we observe so far made it imperative for us to extend the study to include deadly forms of cancer that we had not originally planned to include.”

“One of the most promising classes of new biological therapies is plasmids, circular DNAs into which scientists can insert any gene. When plasmids are administered into a body, for example by a simple intramuscular injection, they enter the cells and the gene inserted into the plasmid is expressed, thereby instructing a cell to produce a protein encoded by this gene.

Founder of CureLab Oncology and the principal inventor of Elenagen, Dr. Alexander Shneider, calls plasmids ‘envelopes’ and the genes inserted into the plasmid ‘letters enclosed within envelopes.’ Thus, Shneider and his team inserted a unique genetic letter into a standard plasmid envelope: a gene that encodes the p62/SQSTM1 protein and which plays multiple roles in a cell, from targeting misfolded proteins to inflammation control and cell signaling.

Triple-negative breast cancer (TNBC) is one of the deadliest cancers, constituting 10-20% of all diagnosed breast cancers. Patients with progressive Stage IV TNBC demonstrating metastasis in remote organs have only a 12% five-year survival rate.

Oncologists at the N.N. Alexandrov National Cancer Centre and Minsk City Clinical Oncologic Centre enroll cancer patients and prescribe them either standard chemotherapy or chemotherapy with Elenagen. Although the number of patients enrolled up to date has been limited, the scientists have been encouraged by both complete and partial responses in some patients. This indicates that both the primary tumors and metastases are getting smaller; some have even disappeared. For some of patients the patients who were administered Elenagen, the disease does not disappear but does not progress for a period longer than for the patients in a control group. Meanwhile, the quality of life for these patients remains good

“Immuno-oncology therapies are often pretty toxic. However, so far, we have not seen any single significant adverse side effect in any of the more than eighty patients in the study,” said Professor Sergey Polyakov, director of the N.N. Alexandrov National Cancer Center.

Another group of patients who received Elenagen as an adjuvant to standard chemotherapy are ovarian cancer patients who stopped responding to platinum therapies. Platinum-resistant ovarian cancer has a median survival of 9–12 months, and less than 15% respond to subsequent chemotherapy. Although Minsk oncologists have not seen tumors or metastasis shrinking and disappearing for this group as they do for TNBC, the first results indicate that Elenagen has slowed progression of the disease.

Results for both study groups were recently accepted for presentation at the upcoming ESMO (European Society for Medical Oncology) conference.

Unlike TNBC patients, women with hormone-resistant breast cancer possessed estrogen receptors in their biopsies at the time of diagnosis. However, majority of the breast cancer patients who are originally responsive to estrogen therapy eventually develop hormone resistance and stop responding to treatment. The clinical manifestation of this form of cancer is very similar to TNBC, which is why the Minsk oncologists decided to include this group of patients as an additional study arm for the ongoing clinical studies.

At a molecular and cellular level, TNBC and ovarian cancer share some similarities with metastatic prostate cancer, including the stage of prostate cancer when the disease is no longer responsive to hormone therapy (mCRPC). Thus, the Belarus Ministry of Health has approved the oncologists’ initiative to test Elenagen as an adjuvant to chemotherapy of mCRPC patients.

Enrollment of Belarus and international patients will start immediately.

CureLab’s lead investigational compound is code-named Elenagen. It is a DNA therapy that consists of a circular piece of DNA called a plasmid that includes a gene for a human protein called p62/SQSTM1. In animal studies and Phase I/II human trials conducted ex-US, Elenagen has shown promise in reversing tumor grade, changing the tumor microenvironment, and enhancing the anti-cancer effects of chemotherapy. Experimental results indicate a mitigation of chronic inflammation and stimulation of an immune response to the tumor.

CureLab Oncology Inc. is a clinical-stage immuno-oncology biotech company headquartered in the greater Boston area. CureLab is dedicated to advancing new and safer therapeutics for solid tumors and other oncology and inflammatory indications. To learn more, visit curelaboncology.com.

N.N. Alexandrov National Cancer Centre of Belarus is the leading cancer institution in country. That is a comprehensive scientific, educational, counseling and diagnosis-and-treatment complex with more than 30,000 patients treated per year. To read more, visit omr.by. 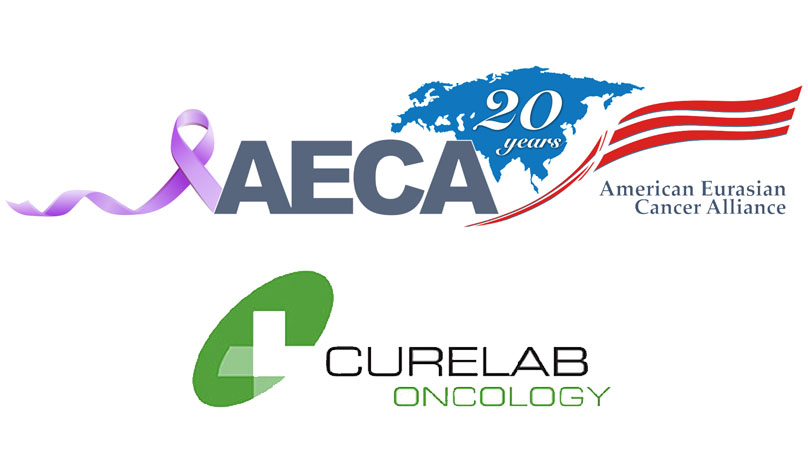